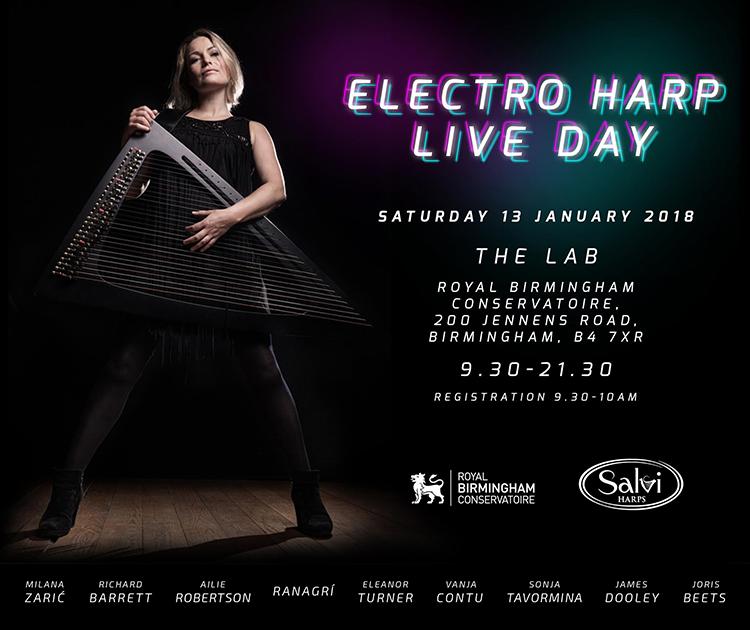 Electro Harp Live on Saturday 13th January 2018 was an incredible, action packed day. Generously sponsored by Salvi Harps and Bow Brand Strings, the day started with Milana Zaric and Richard Barrett impressing and entertaining us with the most virtuosic and intricate of sounds, electronic chamber music, far from people tapping away behind laptops this was 100% thrilling, engaging and astonishing - a wealth of tones and textures. One of my favourite quotes from Richard was "either of us is able to jump out of the score at any moment" and "every time you compose a piece of music you have to reconceive the instrument" - this was so relevant for our non-harpist composers who came, and our composers who are also harpists. Later on in the day, we learnt more and more from this amazing duo, including techniques for group free improvisation, giving birth to the Royal Birmingham Conservatoire's new Free Improv with Prosecco and Cake sessions, sure to be popular!! Even the very next day, I found myself passing on much of their teaching to another student (who was taking part in a different class at the same time!) about creating 'submerged sounds'...such enormous inspiration. Thank you to Richard and Milana for coming from Belgrade for our event - we were honoured to have you.

Running parallel with Milana and Richard's class were two informative and involving looping classes by Vanja Contu and Sonja Tavormina. Vanja and Sonja talked about equipment, tone and techniques - cable quality and buffers were discussed and certain tips and tricks recommended. Vanja uses an Electro-Harmonix looper, Sonja uses a big Boss RC-50 which has XLR input and output, acts as a pre-amp as well, seemingly making the tone of the Salvi electro-acoustic harp even better! It was lovely to hear quality being taught as the priority, with students being encouraged to start with simplicity and a good sound, before building up. Sonja and Vanja also performed their looped compositions later in the day in a relaxed café concert and we heard music by Einaudi, E Turner (yes, me!) and Bjork.

After lunch, we had Joris Beets explaining the difference between the Delta harp and other electric harps, amongst other things, something was top secret so I cannot share it though! A huge crowd of people of all ages were crammed into the Harp Studio to hear this workshop and immediately after it, my band Ranagri gave a shortened Stagecraft workshop where we dealt with issues of professional gigging life - talking to the audience whilst tuning, integrating the sound engineer as the extra member of the band, being prepared, communicating with venues and creating stage plots and so on. This was whilst downstairs in the lab, James Dooley and Ailie Robertson were hard at work with a seven strong group creating a brand new electronic composition called 'Mosaic' together. We heard this performed, completely from memory, at 5.15pm - it was absolutely wonderful. Hugely impressive to hear a fully structured and really well performed composition after just 2 hours in a workshop situation!

The finale of the day was the evening gig, Ailie Robertson from Scotland/London and my own band, Ranagri. I don't know where to start when describing Ailie's show - perhaps I should start by recommending you see it at Celtic Connections on the 4th February at 1pm in Glasgow. Here's the link: https://www.celticconnections.com/events/Pages/event.aspx?ev=08638dc4-fcdd-4d60-a969-a815013c0121

Ailie's 'Seven Sorrows' goes far beyond the description on that website, however. It was impressive, moving, jaw-dropping, exceptionally inspirational and most people at one point cried or at least had a large lump in their throats! Ailie initially created many of the unusual soundscapes she wanted to find for this new work using the Ableton Live software, but at some point she decided to move away from the screen and transfer the sound worlds to an ingenious, if massive, hardware set up. None of us had ever seen so many pedals - even in a shop - but it was the combinations Ailie used and the deft and graceful way she moved around them that had us transfixed and so astounded. Using three very different harps; a Camac DHC Light (split into three channels, no less, controlled by three separate pedal chains, each with volume control), a wee wire-strung harp which Ailie ONLY bowed, sticking relentlessly to the eerily beautiful soundworld of the harmonic series of various strings, like a choir from the most exquisite dream, and finally another small harp set up lying down so that Ailie could move transducer microphones (I think - I'll check with Ailie) slowly around the strings, again producing music based on the harmonic series but with a rougher, more electronic sounding edge to it. Each of these soundworlds was heard both alone and with archive sound recordings of men and women recollecting their experiences of the gaelic tradition of 'keening' - a between-singing-and-crying noise that women created, and were often employed to create, when somebody had died. Friends and relatives would be led by the keeners to the dead body to pay their last respects, with the household embracing the community and children to elderly seeing and acknowledging the dead person and thereby embracing death more as a part of life.

Some of my favourite music was Ailie's rather astonishing, funky but highly emotive throat singing - a kind of gaelic beat-boxing that she used to dramatically shift the energy level of the performance and bring everyone together into the final stages of the music. This was must-see and must-hear stuff, I actually don't have words to describe it! After this sequence of rising and heightening music, Ailie performed a jig of sorts, showing her flair for traditional playing, it was authentic and uplifting at this point (also really foot-tapping and a welcome break from the high emotions) and then the final air, a pibroch, took us to the Scottish mountains, a lament to end the piece, final words from the recorded archive being a gentleman explaining the keening meaning "I don't know how I will go on living without you", his simple, matter of fact tone only amplifying the gut-wrenching impact of Ailie's music. The Camac harp at this point sounded deeper and more meaningful than I have ever heard any harp, electric or acoustic. With the use of the Electro-Harmonix Holy Grail with, I think, the ehx POG octaver adding even more depth [but so subtle I am not even sure if this is the case] Ailie's tone reached the depths of our hearts and the performance ended with everyone truly moved and incredibly grateful to have witnessed the premiere performance of such an exceptional solo creation. When Ailie performs this at Celtic Connections, she told us it will be even better (surely impossible!) and will have string quartet in the sound mix as well. Go along if you possibly can, it would be worth any journey to hear this most unique work performed live and we were all immensely privileged to have been there at Electro Harp Live on Saturday 13th January for the preview performance!

Thank you to every participant and audience member, to Salvi Harps, Bow Brand strings and the Royal Birmingham Conservatoire, to all the parents who supported and brought children, to my helpers Robin Ward, Rita Schindler and Vanja and Sonja, to all of the artists coming from far and wide and to my brilliant band Ranagri - if anyone has any words to share about our performance, please message or email me and I'll add them here! The final word and thank you goes to the extra member in every show, every band, every event on Saturday - to Nigel Hunter, my friend and technological saviour, our sound engineer and more for the day. Nigel worked tirelessly both in set-up on Friday evening and from 8am on Saturday until 10.30pm on Saturday night. He deserves a medal - it simply could not have happened without him.

Til next time, thank you and keep electro-harping!

Programme for the day - rough idea